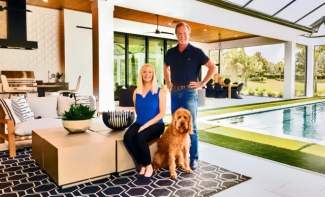 John and Phillipa Cannon are living the dream…their dream to come together as a couple in marriage, start a business together, and do that in one of the country’s most desirable areas – Manatee and Sarasota counties.

John Cannon Homes was founded in 1987 to serve the homebuilding needs of discerning clients. Together, John and Phillipa have sustained the dreams and goals they created and built a business that for 30 consecutive years has earned the distinction of being southwest Florida’s Best Builder from the Sarasota Herald-Tribune.

“One of the greatest things we do is offer home packages for our custom designed homes,” says John. “We take care of the architectural services and the interior design. Many of our clients are relocating and are building their dream home. We listen to their vision, put it on paper, and make it a reality. I love the creative energy and going through that process with clients.  Not many people get to do that!”

John says not only does he get to enjoy doing what he always has loved to do, but he gets to work with Phillipa. That commitment to their business and family has grown, with the two emerging through time as one of the area’s power couples.

“Our clients tend to make their home their haven,” says Phillipa. “They tend to think of everything that they could possibly want and try to incorporate it into their homes. The value of a home serving as a haven became more important during the COVID-19 pandemic.”

John earned a degree in building construction from Michigan State University, which was the foundation of his homebuilding business. He moved to Sarasota at the age of 22, and worked for the legendary building contractor Ruth Richmond, building a few homes on spec before setting off on his own.

“It was my dream to always be a homebuilder and to do it on my own,” says John, who discussed this with his future wife when they were dating.

“He talked a lot about it,” Phillipa Cannon adds. “It had been his passion. I’m lucky to have been a part of it.”

“It may seem a little corny, but when we got married, it seemed like that was a turning point,” notes John. “Being with ‘Phil’ (his nickname for Phillipa) gave me the confidence that we could do it – that we had to do it.” And they did.

John Cannon is paying it forward through his community engagement as an appointee to the University of South Florida Sarasota-Manatee business advisory board for the school’s Business College.

And operating a well-run business is something the Cannons have done for 35 years. John Cannon Homes weathered the nation’s economic ups and downs and faced the challenges of sustaining a family business since its founding, building its headquarters and design center in Lakewood Ranch.  The company stands on a strong foundation, its footprint evident throughout the region, from the Keys—Casey, Longboat, Siesta and Bird—to Lakewood Ranch and beyond, building over 1,500 custom designed homes.

John notes the greatest reward in operating John Cannon Homes is that he and Phillipa “spend so much time together and built something together. It’s been most rewarding realizing a dream, sharing it with Phillipa, and going through the journey together.”

The couple’s son Jack and daughter Rachel—now adults—grew up developing their own strong work ethic having watched their parents serve as role models.

Phillipa identifies John’s greatest strength as having the vision to see the possibilities that are not evident to others. Together, they act on that vision.

John notes that Phillipa brings her outstanding organizational abilities to the table.

“She can break things down into components, organize them, and make sure they happen. She is the ‘heart and soul’ of the business,” he adds.

John is also quick to credit the rest of the John Cannon Homes’ team—90 strong—who have helped pave the way for the company’s success and are key in making clients’ dreams come true.

“We definitely wouldn’t be where we are without our team,” says John. “This is our extended family at work. It’s where we spend most of our time every day for many hours. Many of these people have been with us for a long time. They matter greatly to us.”

As for her greatest accomplishments, Phillipa says that would be her family. She is proud of her razor-sharp focus on balancing raising their children and helping her husband grow a successful business.

That’s an outgrowth of Phillipa’s strong ability to build and maintain positive relationships, says John, adding that she incorporates that into every relationship she has.

“There’s a tremendous amount of relationship that has to happen, not just with the employees. Phil does our banking relations along with every financial aspect of working with our clients, and she does this in a very effective and efficient manner.”

John Cannon pinpoints his greatest accomplishment as building a solid team at the company that bears his name. While he used to spend more time in the construction field, he is confident that he can rely on the team to handle day-to-day activities and perform the work in a manner that reflects the company’s focus on excellence as they build approximately 50 custom homes a year.

The couple’s vision for the future centers on continuing the same path and providing top-notch service for their high-end homebuilding clients. “The lead times on what we do takes years, from acquiring land to developing land to building model homes,” he adds. “All of that requires a cutting edge feel for the market—what are people going to buy five years from now?”

That requires having a keen eye for knowing where to build, when to build, and what to build. “We’re trying to stay on-trend to understand where the world is going,” John adds. “And we’re trying to be trendsetters ourselves. When we design and build models, we must be in the right locations, and that goes back to the team we have in place.”

Phillipa concurs and will be right alongside her husband, helping to keep John Cannon Homes building beautiful trend-setting homes for years to come.